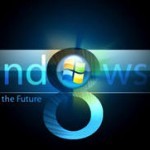 Windows 7 wasn’t even out the door and Microsoft had already started work on Windows 8. The idea was to completely redo the operating system. Not just a change to the shell or pretty clothing but a completely new operating system. This time the self-imposed promise is A No Compromise Design.

There are so many new life changing technologies today that Big Change is a must. Smart phones, music, movies, all of media and communication is in flux. Want a real wakeup call? Think about the fact that in 5 years there probably won’t be any US Mail or TV as we know it. No tangible wired phone option. Not only is this possible it’s probable.

Windows has not had a significant overhaul since Windows 95. Today 66% of all computers are mobile. Laptops and netbooks, tablets and convertibles, they’re all new. Storage has exploded from a few onboard megabytes to terabytes and now the unlimited cloud. Touch screens are becoming the norm with screens from a few square inches to multiples of feet.

In addition to taking advantage of these changes and providing the technology-gorged and greedy public with a Microsoft answer, it must also continue to satisfy the loyal Windows 7, Vista, and slow to advance XP customers.

Taking it to the streets

So, how does Microsoft catch up to what’s going on today? How do they tap into what’s relevant for the majority of their current and future customer pool?

If you want good feedback, if you want to make Windows relevant, turn to the students. And that’s what Microsoft did.

What’s your opinion? What features do you think need to be in Windows 8?

On that premise, what is your opininon on what should be included in the next release of Windows?

Sky is the limit … thinking about the development platform, the usability, the visual aspects. What do you think Microsoft needs to include in Windows 8?

Can’t wait to see your comments!

The above appeared on the official MS Facebook page and you can bet the comments are piling in.

Although solid information is hard to come by, MS is sticking to that promise in several ways. First they are confirming that Windows 8 will be cloud based.

Whether they are behind on this front is not really the point here. The point is that MS is finally getting on board with Cloud based computing with emphasis being on the applications.

It always starts with looks. Amazing that we’ve advanced technically as much as we have and yet it’s still all about the pictures, how it looks, the user interface. That’s how Microsoft started with the unveiling of Windows 8 to the world during COMPUTEX, at a partner preview event in Taipei, Taiwan.

This conference was on June 2nd, 2011 and was for Microsoft partners. You can see exactly what they say by watching the included video above. The next conference is due this month, September 13th – 16th, in Anaheim California, and is known as the BUILD conference.

It’s all about the apps. According to Tom O’Brien of Microsoft, “BUILD is a call to action for developers to take greater advantage of Microsofts platforms”. In other words, “we’re finally on board with the apps thing, get busy and make some for us too”. No longer will you be limited to your iPhone, Android, or other small size appliance for the convenience of applications and browser based computing. And in case you aren’t convinced, Steve Sinofsky makes it perfectly clear.

“We believe there is room for a more elegant, perhaps a more nuanced, approach,” Sinofsky wrote.
“You get a beautiful, fast and fluid, Metro style interface and a huge variety of new apps to use. These applications have new attributes (a platform) that go well beyond the graphical styling (much to come on this at Build).
As we showed, you get an amazing touch experience, and also one that works with mouse, trackpad, and keyboard.
And if you want to stay permanently immersed in that Metro world, you will never see the desktop—we won’t even load it (literally the code will not be loaded) unless you explicitly choose to go there! This is Windows reimagined.”

Did you get that? Windows will not even load to your desktop unless you request it. It will be viewed and just another app. If you wan’t to use your PC as a tablet or with a touch screen there is no need to even load Windows. I’d say Microsoft finally understands what people are looking for. Finally Windows will be back with the pack and providing a 2012 appropriate platform.

CDs, DVDs, Storage and Files. The cost of physical storage space or hard drives has certainly gone down. Now it’s possible to buy 3 terrabytes for as little as a couple of hundred dollars. However the importance of mobility and the fact that 66% of computers are small form factor as limited the size of the drive being use in the majority of computers these days. It has also caused builders to stop including CD and DVD players on tablets and laptops. With the option for large drives limited and optical drives gone it’s obvious there must be an alternative. Online or Cloud storage replaces the need for large physical hard drives. The next hurdle to hop is ISO files. In the past and even now, your copy of Windows is an ISO file on a CD or DVD. Access to the information on those discs required a CD or optical drive. Think of an ISO file as a Disk Image or full-fidelity image (digital copy) of an optical disc. In the past you would put the CD with this information in your optical drive to view or use the information.

With Windows 8 you will be able to mount this file just as if it were an optical drive.

There will also be options for creating virtual hard drives on your system and accessing them just like you would have accessed a real hard drive.

Explorer-The Ribbon Copy, move, rename files, it’s all about Explorer and now Explorer has the Ribbon.

I can hear the screams now. NO! Not the ribbon! I know quite a few people who will not like the ribbon. Personally I like the ribbon and had no trouble adjusting to it in Windows Office. That was probably because I was never that competent at using the previous Office layout. Seemed like a simple drill down to me. So, the ribbon is confirmed, it’s here to stay and those opposed will just have to get used to it or stay in the past. I know many who are still using Office 2003. Old habits and all that.

It’s only natural that Windows Explorer receive a big piece of Microsoft’s attention in this new build.

Microsoft is promising that accessing and managing files in the new “No Compromise” Windows is going to be easier than ever before. No more problems with duplicate file names, file location, or file access. The only hitch is you’ll need to get familiar with the ribbon.

Nutshell This is truly a big change. Windows will never be the same. Finally your computer will be working more like your phone or tablet. Windows will be just another application. As we have known all along, it’s all about the apps and browser. Thinking about where we are in the process of the new Windows 8, I gotta say I’m pretty excited. Don’t get me wrong, I’m very happy with Windows 7 and think it was long over due. I’ve been using it since before the Beta. But if Microsoft had been on the ball, Vista would have been what Windows 7 is now. We would have moved to this new platform much sooner.

I especially can’t wait to see how the new face of Windows effects the hardware being used and specifically the power of the processors. Processors have been getting stronger, faster, and recently more multi-cored with each generation. I’m curious to see if the new app-based existence results in faster processors or faster systems with less powerful processors. How will this effect energy savings and battery life? What’s on the horizon for Internet connectivity,networking, and gaming? These are especially exciting times.

Tell me how you feel about these changes and what you’re looking forward to.

What is PUP Malware and How Do You Remove It?

Feel like your computer just hasn’t been running as fast as usual? Or do you find your work apps inundated with strange ads? In these