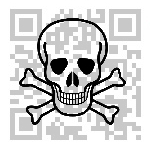 Any doubts I may have had about the viability of QR codes have evaporated. You know a new technology is catching on when malware authors start using it to snare unwary users. Read on to learn how those funny black squares can carry a nasty (and expensive) payload…

QR Code Malware
QR codes are squares of black and white patterns that encode the URLs of Web sites in a format that can be scanned and deciphered by smartphones equipped with the right apps. Instead of typing a URL into your phone’s browser, you can just snap a picture of a QR code and be whisked to an ad, an informative Web page… or a malicious site that silently downloads a virus, rootkit, or trojan to your phone.

Kasperky Labs has detected two samples of malware delivered via QR codes, both targeting Android phones. One of them sends SMS messages from the infected phone to a premium-priced number; each text message costs the victim six dollars! Other types of malware can scoop up your contacts list, send spam emails in your name, and wreak other sorts of mischief.

Bob Rankin: How To Track or Locate a Cell Phone