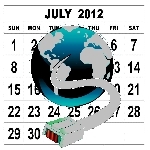 I have read on the internet that hundreds of thousands of computers might lose internet access after July 09, 2012. Is this true? They have estimated that more than 20,000 of such computers are right here in my country. If this is true, how serious is the threat?

I have no idea.

But many people whose computers have been compromised by malware just might. If you happen to be one of those people, then yes – there’s a good chance you could wake up on July 9 to no internet.

I’ll explain what happened, what’s happening in July, what you need to do to find out if you’re affected, and what to do if you are.

In a word, malware.

Last year, malware appeared that infected over half a million computers worldwide. To understand exactly what this malware did, we need to review briefly one aspect of how the internet works.

DNS, or the Domain Name System, is the system used to translate domain names – like “ask-leo.com” – into IP addresses – like 67.225.235.59 (ask-leo.com’s IP address as I write this). It’s the IP address that locates the actual physical server that houses the website.

When this so-called “DNS Changer” malware infected a computer, it altered the DNS server that a computer would use. Rather than a legitimate DNS server, PCs were silently reconfigured to use a bogus DNS server.

A DNS server that would sometimes lie.

Article Continued Here:
This post is excerpted with Leo’s permission from his blog.

1 thought on “Ask Leo: Will You Lose Internet Access in July?”