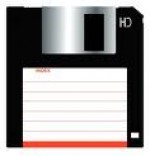 Very similar to the movie, “Night of the Living Dead”, we’ve all known the floppy was a walking corpse. Since 2003 when Dell stopped putting floppy drives in their systems, we’ve been watching a Dead Man Walking. OK, OK, I’m sorry, I’ll stop now.

Sony has announced that they will no longer produce the outdated storage medium as of March 6th, 2011 or before if sales continue to drop. Because Sony is responsible for 70% of the worlds production, this pretty much spells the end of the funny named media.

Floppy is a funny word you know. Just one of those words that’s fun to say. People like to make fun of it like the Cialis commercials.

Not sure why the idea of a dead floppy seems to make the day lighter, but they’ve always been an odd sort of media. Just stuck there in the front of your case. Looking small and insignificant. It certainly had its day but lately I use mine less and less. It seemed that unless I was flashing or making a last ditch effort to access my hard drive, it just didn’t have much use. So now they are truly on their way out and I don’t think it comes as a surprise that there’s no demand for a small 3.5 inch floppy

What a relief to not worry about including it anymore. For the past two years, even though I knew they were dead, it was still a source of stress when deciding not to include one in a system build. I could always come up with a reason to add it in. Now, with any luck they just won’t be available.

Thank you Sony. Here’s to your now dead floppy. It has served us well.

Who invented the first floppy?

Answer: Yoshiro Nakamastu in 1970, but he gets no credit as he licensed the technology to Sony . There seems to be some confusion when you get to who made the first one, who invented the technology, first 8″, first 5.25″ first 3.5 inch. IBM did the first manufacturing and it was an 8″ floppy. This was followed by a 5 1/4″ and then the 3.5 hard shell by Sony in 1981. If you like to search this sort of thing out, there is plenty of Google/Bing info.

64-Bit Systems on The Rise

5 thoughts on “Night of the Living Floppy”