Intel’s latest announcement describing the new Stars rating system has me questioning what’s changed in the way of judging processors by their specifications.
Maybe if I redefine what a processor is, that will help me focus on what I’m looking for when making a purchase.

The job of a processor is to execute program instructions which perform functions. These instructions come in the form of software, so basically a processor interprets software. How well it does this is determined by its architecture or its internal design. Intel and AMD describe this internal design with names like P4, P III, i7, and so on. Within these architecture types are family names like Nehalem, Centrino, and Sempron.

In addition to the internal design, it’s important to know how the processor communicates externally to the rest of the PC. This takes into consideration the interface between the systems chipset, memory, and all the other devices connected to the motherboard. The lines of communication between the cpu and these other devices are called buses. For the purpose of this article I’m limiting the discussion to the processor and memory bus.

You may have heard people refer to the processor’s Front Side Bus or FSB. This is the pathway that takes information from the processor to the memory controller. It is usually given a number that designates its size or width, for example a 333Mhz FSB. The number is describing the amount of information that moves across that path. Intel’s latest architecture moves the memory bus inside the processor so for the very latest, FSB is no longer a factor. This is not the first time for this arrangement. AMD has done this for quite some time with their HyperTransport. Moving the controller into the processor is all about improving communication to the memory located on the motherboard of your system. It’s a proven technology.

OK, so lets take a look and see where we are so far; architecture and FSB or Front Side Bus. I’m leaving FSB in the equation and you’ll see why later.

The next thing to look at when considering a processor is it’s size. What “size” processor is it? How is the size determined? Basically the size of a processor is determined by the FSB and a multiplier. So, if you are using an Intel processor with a FSB of 333MHz and a multiplier of 9, you will have a 2.997 GHz (333×9=2997) or rounded off a 3 Gig processor. This multiplier is never shown on packages or the easily found in the specs, so be content to know the FSB and total Clock Speed ie. 3.0 Gh of your processor. When you hear the term “overclocking” these are the two main settings it refers to. If you take the above 333MHz x 9 = 2.997 processor and change it to 383MHz x 9 = 3.4 GHz processor. That’s not what I’m suggesting but it is what overclockers do. 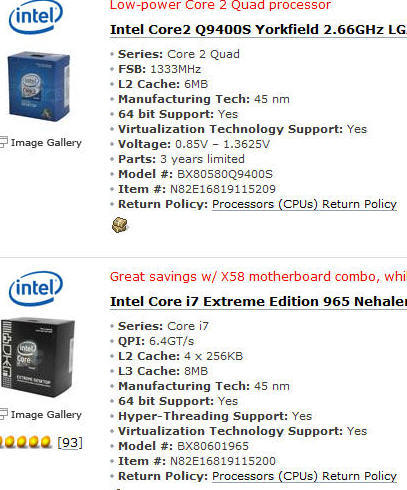 At some point people believed that a dual core processor was twice as fast as a single core processor but that wasn’t exactly true. Just like a highway,vehicles don’t move faster just because there are more lanes. You just move more of them. If there’s not enough work to max out a single core then the extra core does not help. One more point, just to be sure I’m not giving the wrong impression. Because an older single core processor is clocked higher doesn’t mean it’s faster than a lower clocked newer processor. The reason is that newer technology is faster of itself.

Remember to stick with the latest architecture. It’s always smart to get the biggest and best, most cores and highest clocked processor you can afford. That’s what gives you the best performance and a hedge against the way technology progress to out date your system.

If I were to buy a processor today, my first step would be to check the Intel site and find the latest and greatest Architecture. That is i7 Nehalem. Because I already know that Nehalem does not use a FSB I’m about ready to skip that when I notice something called “QPI” That stands for quick path interface and justs like FSB there are differing sizes available.

Nehalem comes in two sizes so of course I want the larger 6.4GT/s over the smaller 4.8GT/s. Intel calls this the Extreme edition but call it what you like it is still a measurement of how fast data flows through the memory. I check to see what’s available in cores. The most I can get is 4. After that it’s the size of the processor as determined by clock speed and memory operation. To determine what’s available I visit several online sales sites to find the largest available and the price.

It’s a very nice 3.2 GHz processor but Yikes, $999.99, that’s out of my price range. I gotta drop back from the Extreme with the 6.4 GT/s QPI and go with the lower priced 4.8GT/s i7 quad core. Still an up-to-date architecture, quad core, and should be plenty fast enough for what I do.

FAMILY + SPEED + CORES = RIGHT CHOICE, or I can use the Intel Star system and have no idea of what I’m getting.

*Note: Software is still behind the curve when it comes to taking advantage of multi-core processing.

53 thoughts on “A Beginners Guide To Choosing Processors”