To SSD Or Not To SSD

The next big improvement for your computer is here. The always spinning, ever failing hard drive is becoming an artsy door stop, replaced by Solid State Drives (SSD). They have a lot going for them but there are also some misconceptions about what they provide.

Untill now, cooling fans, optical drives, power supplies and hard drives, all had moving parts. Moving parts and wear go hand in hand, so it’s no surprise that hard drives are at the top of everyones failure list. Now, thanks to SSD technology, it’s possible to put together a consumer computing system with no spinning hard drive or optical drive. You could conceivably get by without even a cooling fan but why try. Using one low rpm fan would provide fresh cool air with little to virtually no noise.

Lets take a real look at what SSD drives are, and what they can offer us in real life improvements.

Size. Their small 2.5 in. x 4 in. size makes them perfect for use in desktops, laptops, and notebooks. In fact they use the same form factor as your current SATA laptop drive. They are available in a 1.8 in. size in addition to the 2.5 in. size popular now. The technology on the 1.8 sized drive is actually faster, but the 2.5 size is getting all the action due to manufacturing costs.

Data And Power Interface. SSD drives use the exact same connections as existing SATA and SATA II drives. Some of the lower priced SSD drives even come with an IDE connection.

If your laptop uses a standard SATA interface you can just unplug that drive and replace it with the new SSD. The drive holder/heat sink and securing mechanism are interchangeable.

Weights of the SSD drives are significantly lighter than the standard spinning platter drives and also lighter than notebook drives. Note that the laptop heat sink and the SSD drive case are configured to match for attachment and as noted,use the same form factor. This makes for a more secure installation and easier removal.

Temperature is a strong point for SSDs. Compared to full size drives the difference is significant. What might not be so obvious is how small a reduction there is when compared to current 5400 rpm laptop drives. The newer laptop hard drives use little power, and are relatively cool during operation. My digital thermometer shows only a 3 to 5-degree difference between the two. Of course any diffrences in heat would be a driect result of the watts being used. The specifications posted on most manufacturers sites bear this out. Without giving a page full of “watts used” for varying drive states, just be aware that there’s a big difference in watts used between SSD drives and larger 3.5 inch drives, and not much difference between SSD drives and 5400 rpm laptop drives .

This reduction stayed constant with varying types of HD use. While the temps fluctuated depending on the task, the difference in temps between the two drives stayed about the same.

The 7 degree difference between 5400 rpm laptop drives and SSD drives during load is nice, but the hard drive is not the component causing the majority of heat coming from your laptop. Most of the heat is coming from the processor and memory. The switch to SSD made no measurable difference in the peak temperatures coming from under the laptop. The expected result was obvious but I was still disappointed.

Price is where the proverbial SSD hits the fan. The 32-gigabyte OCZ SSD drives that I bought cost a whopping $499.99 each, plus shipping. Yes, drives can be found cheaper, and yes there is a difference in cost from mfgr to mfgr, but the performance of these particular drives is excellent. They are at the top of most performance comparisons. The fly in this ointment is that even considering performance the cost is extremely high. The only good news regarding price is, according to all predictions, the price will drop significantly in the next year. Intel is on board and promising that their future involvement brings a better/faster controller and the expectation of some significant price slashes.

Raid Arrays are configured the same as spinning platter drives. Raid options will depend on the motherboard and bios. Iâ€™ve tried it myself and the results and scaling are excellent. I raided 3 drives in raid 0 and there is a second system shown below that has four drives in raid 0. While I liked the results, the cost was just a little rich for my pockets. You can check out my Pitstop score here and the test using 4 drives in raid 0 are shown here Be sure to click “Rankings” once in the OverDrive test.

Maintenance is much changed when using SSDs. DO NOT DEFRAG, defragging degrades drive performance. This caution should be placed in clear view, on the drive itself. New owners should be made aware before physically installing this hardware. Drive defragmentation has become such a standard procedure that itâ€™s likely many will defrag before knowing the consequences.

Drive Life of SSD drives is much extended over standard drives. Because of the extended time without failures and the rugged build of the drive having no moving parts, the military was one of the first to adopt this technology. Drive life is expressed as MTBF or Mean Time Between Failures. For SSD drives this can be as long as 2,000,000 hours and is years beyond what would be needed.

It has only been a few months since we finished the article on extending laptop battery life. One of the things we did was play a movie from the hard drive until the battery was completely discharged. For a comparison of how SSDs affect battery life, we used the same setup. I copied a movie, “Over The Hedge”, to the notebooks hard drive. The battery starts the test at a complete 100% charge and is run uninterrupted until the screen goes black. The time is recorded in minutes.

I ran several tests using the settings for Performance, Balanced, and Power Saver. They scaled, as you would expect, so Iâ€™m including only the representative results here. To be a valid comparison the settings for the hardware and Operating system on the two drives had to be identical. To guarantee that the drives were exactly the same, I used Acronis True Image Home and cloned the OS setup to the drives. This removes any chance of settings variations affecting the outcome. *Please note: the comparison being made is between drives on a given system and not between systems or settings

These results show that SSDs do not dramatically increase battery life. Certainly not enough when considering the costs.

For performance comparisons I used HD Tune in addition to our own OverDrive test. One of the first things to notice is the increased â€œMaximum MB/secâ€ transfer rate. When compared to the 5400 rpm laptop drive, the SSD drive is 66% faster and is the clear performance winner. 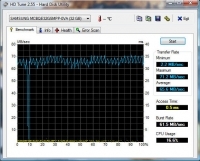 Next notice the reduced access times. Without getting too far into the world of data transfer, this basically represents the speed of transfer over the interface between the hard drive and the rest of the PC. With SSD drives this is much reduced, as there are no platters to transfer data to and from. Data and file transfer, application access, and even better boot times, as were measured and shown below, are the result.

Another interesting result was that increased CPU usage spikes were seen on SSD systems. This increase does not seem to be consistent and is much higher than the expected 2% increase noted by others. The spikes were seen under varying use conditions, on multiple SSD drives, on laptops and desktops, and on multiple operating systems. The thumbnail above shows this spike. Instead of 16.6% CPU usage it would normally be 2% to 5%.

I was unable to determine what caused the big jumps. My best guess is that it’s something to do with the SSD internal controllers.

Let’s cut to the chase and say that there’s no doubt SSDs are on their way to your system, but it will be a while untill they take over.

Even if you’re an overclocker, SSD advantages are small when compared to the current Western Digital VelociRaptors. Raptors have much more capacity and are cheaper to boot. Pun intended.