I received this email the other day from an old associate.

Why does PC Pitstop keep bashing Vista? Isn’t it like biting the hand that feeds you?

This email really gave me a pause because they are right. It hit me like a ton of bricks. PC Pitstop needs Vista to be successful. We are part of the Windows eco system, and in many ways, it is not in our interest to bash Vista. But on the other hand, it is not in my nature nor the company’s DNA to ignore the realities of Vista.

Here’s a great example. I began playing with Windows Movie Maker long before Vista was introduced. I find it enjoying, relaxing, and entertaining to make personal videos. But now that I have upgraded to Vista, it is frustrating and annoying. In fact, I have given up. The reason is that Windows Movie Maker crashes under Vista. 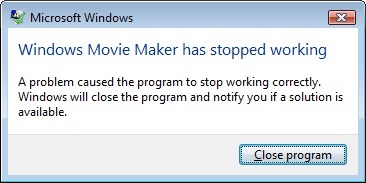 Microsoft, please wake up. Vista is your flag ship product. Remember when Bill Gates perceived that Netscape was a huge threat to Windows? Almost overnight, the company was turned on its ear. Every hand on deck was focused on making Windows and Office compatible with the internet.

There is a new threat to Microsoft’s stranglehold on operating systems, and it is not Linux or Safari. It is internal. The enemy is within. The list of Vista’s problems is long and well documented. Wary consumers are moving to alternate operating systems at an alarming rate because the problems are being fixed so damn slow.

So that’s step one. Focus the company on making Vista a solid operating system that is fast, reliable, and a feature set that blows Apple and Linux away. But there is still more work to do.

Frankly, the Apple commercials make me sick. The reason my stomach turns is because they are attacking Microsoft. They are not going after Dell, HP, Intel or NVIDIA. They are going after Vista. And what does Microsoft do? NOTHING. You guys need to do something. I’ve been a Windows user ever since Windows 2.0. It’s been close to 20 years. Make me feel proud that I am part of the Windows ecosystem. Respond to the Apple’s ads. Slap those punks back into place. God knows you have the money to do it.

I sincerely hope this blog makes it back to Redmund. All of us are really counting on you guys.