For years I’ve followed the browser wars using NETMARKETSHARE as my main reference. I’ve watched as Firefox has slowly crept up in usage while the chosen one, Internet Explorer, has just as slowly given up half-share after half-share to the field.

During this long and slow competition Firefox has become the favored challenger to IE. Using features like tabbed browsing, speed, and a host of add-ons, Firefox has slowly gained market to put it somewhere in the 20% to 30%, 2nd position. The exact figures change according to whose collecting the stats and how they are collected.

This year the trend of Firefox slowly adding to its share seems to have changed. Just like Internet Explorer, Firefox has lost market share every month this year.

While this decline may not be as entrenched as Microsoft’s nose dive, it’s the first time Firefox has posted declines for three straight months. Speculation has already started that Firefox may have hit its peak.

Chrome is the only browser of the top three to post gains and those gains are coming at the expense of IE and Firefox. Earlier this year I noted that the enthusiasm of once noisy Firefox devotees seemed to have cooled. They seemed less intent on insisting Firefox was the only answer to browser happiness. Now I’m wondering how many Firefox users are slowly switching to chrome. 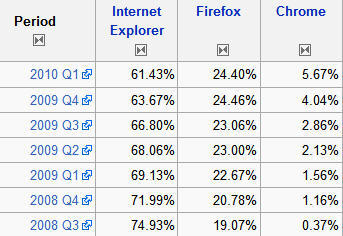 For the past several years the only trend to watch was how much market share was being gained by Firefox. Today the real race is between the second and third horse, FireFox and Chrome. That’s a big change from just 3 months ago. At the end of 2009, Safari was in the number 3 position, followed closely by Chrome. Now Chrome is in the number three position and has opened up its lead on Safari.

If things continue at the current pace, Chrome could be looking at 10% market share by 2011. Meteoric rise is a phrase that comes to mind to describe this.

Here’s an excerpt from our last Browser Wars Article.

Changes seen this year are substantial, but the rate of change doesn’t seem to be the story here. It’s the fact that two major players allowed for substantial gains by Chrome, Firefox, and even Opera. Safari’s failure to supply a browser that works as well on Windows as it does on Mac, along with Google’s release of Chrome for Mac OS X, put Chrome in the number 3 position over Safari but well behind Firefox.
Internet Explorer and Safari had combined losses of 7.48% while Chrome, Firefox and Opera had combined gains of 7.35%.

Internet Explorer’s loss of 7% in the past year is staggering. When looking at the figures for IE the term Nosedive springs to mind with a visual of a large WWII Bomber plunging to earth in flames.

It seems now more than ever, the shape of the latest devices will change the use of software. Will iPad will push Safari closer to regaining it’s third position. What effect will Smart Phones and Android have on browser share?

What do you think will happen to Internet Explorer, Chrome, and Firefox in the next couple of years? Will the default Android browser get a call in this race? I’d love to hear your opinion and the good thing is that you can’t be wrong because it’s an Opinion.