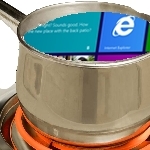 With Windows 8 having become available around the world in the last 24-36 hours there will quickly be people either upgrading their current PC’s to the new OS or purchasing a new computer with Windows 8 installed on it. Some of those upgraders will be high level geeks and others will be everyday computer users that want to update to the latest offering from Microsoft.

Whatever method you use to become a Windows 8 user the biggest recommendation I can give you is to have patience with yourself, the OS and give Windows 8 a chance.

There is no doubt that Windows 8 is a huge shift from what we are all used to seeing over the years in the Windows operating system.

In fact, I think this is the biggest shift in the user interface of Windows since Windows 95 came out in August 1995. Since then the interface has remained relatively unchanged in its basic functionality and familiarity.

in Windows 8 Microsoft has opted to merge not only the traditional Windows desktop which we all know very well over the years of Windows XP, Windows Vista and Windows 7 but to also introduce a touch first interface that will work on tablets and other type of touch based devices such as touch screen all in one PC’s, etc.

And yes, it also works on a non-touch system with your mouse and keyboard.

You may have heard that the Start Menu is now gone and it has been replaced with the Start Screen. Think of the Start Screen as a full screen Start Menu that is fully customizable by you to display tiled shortcuts to programs and apps on your machine.

This excerpt appears with permission from Windows Observer.

Windows Observer: How to Navigate Windows 8 with Mouse & Keyboard