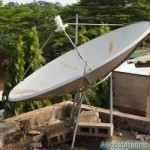 How Does Satellite Internet Service Work?

On the plus side, satellite Internet can reach remote areas where no other type of Internet access can go. Satellite Internet is moderately fast; consumer data plans range up to 15 Mbps. (For comparison, see my related article What is The Fastest Internet Connection?) But there are limitations on the quality of satellite Internet.

The biggest is latency – the delay between sending a data packet and getting a reply. Latency can be a problem for interactive applications such as VoIP (internet calling), video chat, and online gaming. Streaming video may stutter due to buffering delays. Latency is higher in satellite Internet systems because the data signal must travel tens of thousands of miles to the satellite, down to the ground, and then back the same route again.

The geostationary communication satellites that are used for satellite Internet service are about 22,230 miles above the Earth. So your actual data path is four times that, or over 89,000 miles. So even at the speed of light (186,000 miles per second) that round-trip transmission takes almost half a second (500 ms). That’s a noticeable span when doing anything in “real time” such as playing a game, or having a voice conversation. This half-second satellite latency is imposed by the speed of light, but additional network latency can add to the problem of slow or stuttering performance.

6 thoughts on “Is Satellite Internet Service a Good Option?”