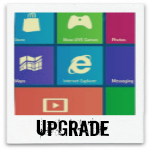 4 Things You Need to Know About Windows 8 Upgrades

As the date for Windows 8′s release draws near, you’ll be seeing many more commentaries and tutorials about it as we get a first-hand look into the operating system. We’ve already made a number of reviews, had a look into up and coming apps for the OS, and even made a final “pros vs. cons” piece as a prelude to its release. Now, we’re going to discuss what you should know before upgrading.

Note: We’re about to discuss some of the things that Microsoft may or may not make very public about the operating system in order to help you understand what you’re getting into before you take this upgrade into consideration.

1. On A Computer Without an OS, You Can’t Install The Full OS From The Upgrade Copy

If your computer doesn’t have an operating system installed, you might as well throw your copy of Windows 8 in the bin unless you already at least have Windows XP. I think it would be very obvious that you shouldn’t purchase an upgrade to install the entire operating system without at least installing a full version of another. This was possible, though, on previous versions of Windows. It’s Microsoft’s right, after all, to properly allow people to install the upgrade copy as it was meant to be. The copy costs only $39, so I’m wondering what the prices for the OEM versions will look like.

2. You Can Upgrade From The Release Preview

Those of you using the Windows 8 Release Preview would be happy to know that you can actually upgrade from it. This is a given, considering that Microsoft doesn’t want to have to make you install the operating system all over again just because you’re using a preview build. I personally believe that the only noticeable difference between Windows 8′s final build and the release preview is that the release preview will expire in 2013. Of course there will be a couple of finishing touches implemented in the final build, but perhaps the main reason you’d upgrade would be to ensure that your operating system doesn’t turn your computer into a fancy paperweight.

2 more things you need to know…