It has been a year since my last Browser Wars report and at that time I predicted the continued climb of Chrome, the fall of FireFox, and the steady fade of Internet explorer. Today that prediction has come true. Google Chrome has overtaken FireFox as the number 2 browser in the world.

Independent testing group, StatCounter has released the graph below showing browser usage from November 2009 to November 2011. The graph shows Google Chrome with 25.69% and Firefox with 25.23% of market share. 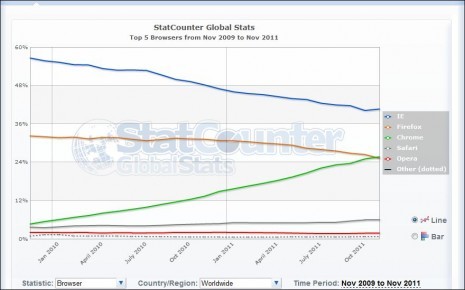 The figures for the UK show Chrome with an even stronger lead at 24.82% of market share and Firefox at 20.56%.

StatCounter CEO Aodhan Cullen reports that the stats are based on actual usage and not simply download figures. The graph is an aggregate of data collected from a sampling of the StatCounter network totaling over 3 million websites with 15 billion page views per month.

I installed Chrome when it first became available but my experience with Chrome was not “love at first sight”. The minimal appearance of chrome took some getting used to but its performance was remarkable. It was just plain fast, I was hooked.

In previous articles I used figures and graphs from NETMARKETSHARE. Their figures are not out for the month of November but the trend is obvious when looking at their latest graph. Check it out below.

The next year should see exciting changes in the Browser Wars. Internet Explorer continues to hold the first position but I see a future where Chrome will challenge Internet Explorer for first place. I also have to wonder if there will be any new entrants into the wars.

Tell me what you think

22 thoughts on “Chrome Blows Past FireFox”