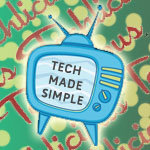 By Robert E. Calem for Techlicious

By definition, a baby monitor must be placed near a crib, but this raises the risk of strangulation for the child, who may be tempted to play with the device’s cord if it’s within reach.

Make sure your baby monitor is placed so that the cord is more than arm’s-length away from the child––ideally, at least three feet away.

Also, it’s not just baby monitors that present this strangulation danger. Movement-monitor sensor cords also should be kept taut and not dangling, the CPSC warns.

The batteries can get stuck in children’s throats where they can cause severe chemical burns. The effect starts within minutes of ingesting the battery and within two hours can burn a hole through the esophagus where it’s lodged, says Toby Litovitz, MD, executive and medical director of the NCPC.

Parents should be careful not to leave a “dead” button battery within a child’s reach when putting a new battery in a device. Even a dead battery still has enough of a residual charge to cause the same sort of burn, Litovitz explains.

PC Pitstop is proud to welcome our friends at Techlicious as guest contributors. Founded by consumer tech guru, Suzanne Kantra, Techlicious is your daily scoop on everything from the best new mobile phones and apps to holiday shopping guides to step-by-step instructions for protecting your privacy on the Internet.