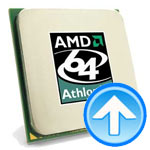 In a Microwave world where everyone is looking for immediate satisfaction the computer system is not exempt.
Faster processors, larger RAM, and faster broadband connections are a few examples of optimizing a computer’s potential.

Years ago it was basically just Servers reaping the benefit of 64-bit processing, but today 64-bit processors have almost become common amongst desktop PCs. This advanced technology actually doubles the amount of data a CPU can process per clock cycle, essentially blowing the 32-bit chip out the water.

In the past the trouble with making this 64-bit upgrade was that your 32-bit software would not work well, and you would need new drivers for all your existing hardware; drivers that may not yet be available. However the 64-bit software market has made tremendous strides now to the point where users can even find some quality 64-bit freeware applications. Although the drivers could still be an issue, just as long as you are using a newer computer it should not be a restriction.

The basic requirements to run a 64-bit system pretty much consist of having a 64-bit chip like an AMD Athlon 64, Turion 64, or an Intel Core 2, or Pentium 4 processor. Also you will typically need 4GBs of memory because most 32-bit systems usually top out at around 3GBs of memory.

Finally there are several Operating Systems available for potential 64-bit users. If you were not a fan of Vista, and are not ready to switch to Windows 7, it is not a problem; 64-bit Operating Systems include Windows 7 64-bit, Vista 64-bit, XP 64-bit, Mac OS X, etc. These are all basic specifications you should look for when purchasing a new computer, but if you are planning to upgrade an existing computer you could potentially need a few additional hardware changes.

So is it worth the upgrade? Yes, simply because the transition is inevitable. Already many PC gamers, users of CAD, desktop publishing, and/or scientific software benefit from the 64-bit technology graphic enhancements. Just think digital television and blu-ray DVD players, because those are two examples of inevitable changes in technology where manufacturers decided to force change upon consumers.

It’s time to be on the cutting edge. Everyone in the world needs to follow the example of the Canadian Pitstop populous and make the switch sooner than later.

64-bit trends based on PC Pitstop users since the start of the year:

The 64-bit upgrade will start with the Desktop.

64-bit home use is supposed to increase faster than Business.