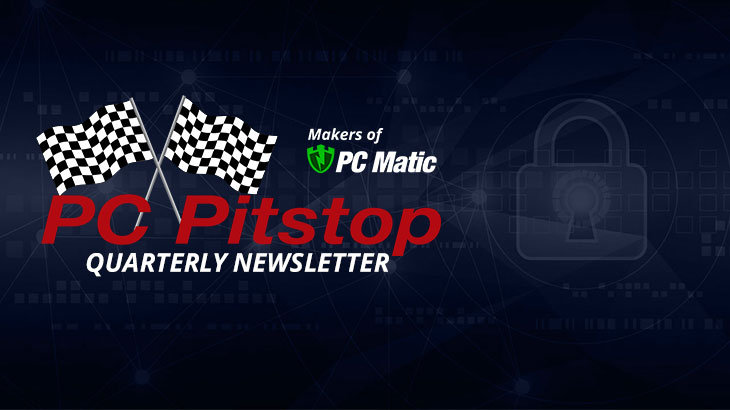 Views From The Top – Letter From PC Pitstop CEO

The last three months have been powerful and eventful.  Since the last newsletter, we made public the results of a ground breaking security test in cooperation with AV Comparatives. Many security products avoid public testing, and this test was the first to include all security products in one comprehensive test.  The test broke out ransomware as a separate category so one could see which products protected against this emerging threat.

The feedback has been astounding.  At this point, close to a quarter million unique visitors have seen the report with an average of six minutes on the page.  To drive the conversation, we left comments open and over 500 comments have been submitted.

Two companies, Malwarebytes and Webroot, had either limited or no public testing, and neither company did well on this test.  The day after the results were public, Malwarebytes began detecting PC Matic as PUA (potentially unwanted application).   For our customers, it meant that PC Matic was removed from the hard drive, and more importantly, Super Shield, our white list real time protection, was deleted leaving our customers unprotected.  This was unprecedented since both Malwarebytes and PC Matic are Microsoft certified.  No Windows certified AV engine had ever detected and removed the components of another.

I am pleased to announce that after 30 days of the first detection, Malwarebytes stopped recognizing PC Matic as PUA.  I want to thank Malwarebytes during this episode.  Once we found the correct people, they were professional and responsive including working during the Christmas holiday.  I also want to thank the PC Pitstop employees who worked on modifying PC Matic to Malwarebytes specification, dealing with our surprised and frustrated customers, and working with the public at large.  It was incredible to see a group of professionals working together for a common goal.  No one person could have got the job done.  It took a team.  Most of all, I want to thank our customers.  The outpouring of public support was humbling and inspiring.  Thank you.

While all that was going on, we received a perfect score on the Virus Bulletin RAP test.  It is historic, since no product had ever come close to a perfect score.  In April 2016, we launched with little fanfare our Super Shield 2.0 engine.  This Virus Bulletin is the first test result using Super Shield 2.0.   This VB RAP result is validation of the power of white listing.  After all, don’t we all want an AV that identifies all the malware it encounters?  I am even more proud that Super Shield 2.0’s false positive rate was negligible (1.5%).

The Virus Bulletin RAP test is the security industry’s most rigorous test throwing 50,000 pieces of malware at each engine, and an additional 850,000 good files in the false positive test.   The proactive portion disconnects the internet connection for two weeks before running against the most current samples.  This test is so difficult that many products, including those with big market share, decline to participate.

I’ve saved the best for last.  Another aspect of Super Shield 2.0 is enhanced analytics that give our research team a unique view of the emerging threats our customers face.  In December, we found a whopper.  Windows has a variety of scripting engines such as Powershell, WScript, Cscript, and others.  The problem is that more often than not, these engines are used for distribution of malware.  Frequently it is to drop a bad file on the hard drive for subsequent execution, but in some instances, the malware executes without a file.  Some in the industry call it fileless infections and we call it dark scripts.  Not only can Super Shield 2.0 detect dark scripts, our new architecture prevents them.  Super Shield 2.0 is the only technology that protects against today’s threats and emerging ones.

For our current customers, you have been upgraded automatically to Super Shield 2.0.  You now have the highest detection rate security in the industry as well as dark script protection.  For prospective customers, please look at detection rates when considering a security product.

The end of 2016 marked a final validation of the superiority of our technology, Super Shield 2.0.  We can’t wait to see what all these results mean for 2017.

As a product, PC Matic stands out against our competition in several ways. However, our products aren’t the only thing that set us apart.  Over

PC Pitstop Team Expands As we continue to grow, we are filling open positions with the finest American talent we can find. Our most recent