Does anyone really read the End-User License Agreement (EULA) before putting a check mark into the infamous “I ACCEPT” box? Personally, I can’t say that I ever have. So exactly what terms have I accepted? For example Spotify, one of the leading applications for music entertainment, has recently came under fire with their updated EULA which includes, but is not limited to, the rights to track consumers’ movements, photos, contacts, and locations (Forbes, 2015). Seems a bit intrusive for a music app, don’t you think? However, the real questions are how many consumers blindly accepted these conditions and how many continue to do so? Had these controversial terms and conditions not been exposed by the media, would anyone know they’re there? Probably not; let me explain:

As some may know, in 2005, PC Pitstop added a Special Consideration to their EULA, that took over four months and 3,000 sales before being acknowledged by a consumer. The purpose of that exercise was to show the public just how infrequently EULAs are being read prior to the consumer accepting the terms. Since the article was published 2005, it has been sourced in multiple media & legal outlets in hopes of keeping the public aware of the trending issue of individuals blindly accepting these license agreements.   Unfortunately, against our better efforts, the trend continues. In 2015, PC Pitstop decided to run their experiment again. The Special Consideration was added to the PC Matic EULA, which can be seen below. After a month and a half and approximately 60,000 downloads, PC Matic customer, Stephen Ellerin came forward acknowledging that he had read the Special Consideration.  Ellerin reported he “always makes a point of reading the EULA/Terms & Conditions” for any software he installs. In recognition of Mr. Ellerin’s diligence, PC Pitstop awarded him $500 and a complimentary lifetime upgrade for his current PC Matic license. 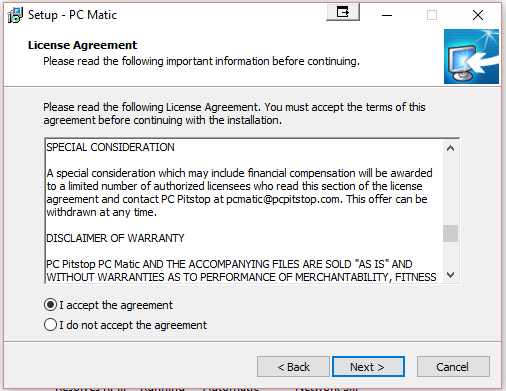 Fortunately, PC Pitstop simply added the Special Consideration to gain insight into how many of their current consumers read the EULA. However, like Spotify, many companies use the EULAs as a means to gather additional data on their consumer base, often times without the consumers’ being aware.

One of the most damaging cyber-thefts in US history

23 thoughts on “History Repeats Itself – EULAs Continue To Go Unread”