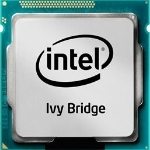 By Rich Robinson for Windows Guides

Ivy Bridge: Intel’s New Processor Features (3rd Generation i3, i5, and i7)

What is the name of the new processor series from Intel?

What is the main difference between Sandy Bridge and Ivy Bridge?

This excerpt appears with the permission of Windows Guides.