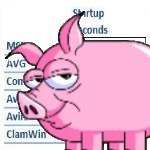 I put six popular, free antivirus tools through their paces and measured their impact on startup and shutdown times, disk space, and RAM use.

Normally, reader letters appear in the LangaList Plus section of this newsletter. But sometimes, one comes along that warrants treatment in greater detail.

One such letter is this one, from subscriber Bill Garfield:

“Occasionally you either recommend or suggest Microsoft Security Essentials as a viable free alternative to commercial anti-malware programs without mentioning the also-free competing products such as AVG and Avast, to name just two.

“MSE is an enormous resource pig, adding a full 30 seconds or more to boot times. Many Windows users look to Windows Secrets for tips and tricks to improve performance. Based on my experience, MSE does more to hobble overall system performance on supported platforms than to improve it.

“Please stop recommending MSE, or at least include an advisory disclaimer cautioning users that loading MSE has been reported to cause performance to suffer.”

As the Windows Secrets author who has recommended MSE more than any other contributor, I was alarmed by Bill’s letter. I decided to run a series of head-to-head tests, comparing MSE’s resource usage to other popular, free antivirus tools.

I did not test these tools’ ability to detect malware. With the possible exception of ClamWin — which is quite new and still evolving — most third-party tests rank all these tools as acceptable and some of them as excellent. (Valid malware detection-and-removal testing can be done only in specialized labs, and their published results are difficult to compare.)

Because MSE is completely free, I chose to compare it against programs that also are truly free — no strings (such as free trials of commercial programs) attached.

I chose software that, like MSE, is specifically designed for malware protection — I didn’t include integrated, do-it-all security suites.

To make the selections, I used popularity ratings from several sources, such as the download stats and user ratings from CNET, MajorGeeks, and other sites. (The rankings and numbers in the list below were current at the time of writing.) I also gave extra weight to products frequently mentioned by readers and other authors in the Windows Secrets newsletter as well as tools that looked especially promising (as you’ll soon see).

I settled on these six antivirus tools:

Microsoft Security Essentials (site): Because I’ve recommended Microsoft’s consumer anti-malware application in previous stories, I’ve made it the baseline for these tests.

Avast Free Antivirus (site): Avast claims its package is the “world’s most popular antivirus.” CNET also ranks it #1 on its download list.

Avira Free Antivirus (site): It ranked #2 among CNET users, and it scored an impressive 4.7 out of 5 rating on MajorGeeks.

AVG Technologies’ AVG Anti-Virus Free (site): The publisher of this app says it’s used by “over 100 million people.” CNET ranks it at #6 in popularity.

I know there are many other products out there, but I couldn’t test them all. I believe the preceding list is a good sampling.

Here’s the rest of the story…

6 thoughts on “Windows Secrets Newsletter: Is your free AV tool a ‘resource pig?’”