Is it just me, or does Windows update at the most inopportune times?!  It seems like that is the exact moment I need to use my PC, shut down the device, or I’m in a hurry to get the day going.  But then I get thrown into a “wait on Windows update” loop. 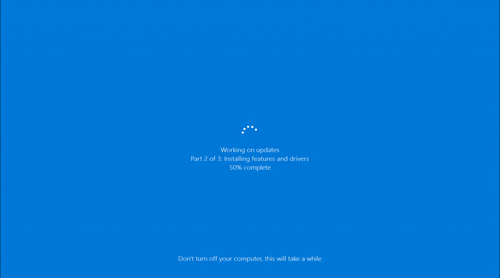 As annoying as the timing may be, these updates are important for the device.  Therefore, as the user, we are stuck waiting for the process to wrap up.  Although, there may be times that we cannot do this.  For instance, business travelers cannot exactly leave their computers on to update while flying, and there are certainly times these updates end up freezing the device.  What do you do then?

While the update screen is showing, users do not have access to power down their computer.  The only way to kill the power to the device is to do a hard-shutdown.  This means, manually holding down the power button for a few seconds until the machine shuts down.

But wait, the update often will specifically state “Do not shut down the device”.  Yes, yes it does.  However, if the device needs to be powered off for safety reasons, or because it is frozen, you don’t have any other option.

During the testing completed by How To Geek, there were no negative effects of doing a hard-shutdown mid-update.  Although, that is not to say all devices will react the same.  If the update is not frozen, and the user can wait out the update, they most certainly should.  However, if the device freezes mid-update, a hard-shutdown is the only option.  Users are encouraged to maintain timely backups of the files on their computers to avoid any irreversible damage.

7 thoughts on “Computer Froze Mid-Update? Here’s How To Fix It”