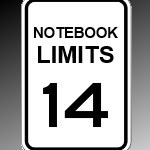 14 Limitations of the Notebook PC

I’ve mentioned many times that, for a long time, my main computer was my notebook computer. Sure, I had a desktop computer, too, I just didn’t use it very much. I also had my home theater PC and a Linux-based file server for backup. But, my Dell Inspiron 8600 was the real workhorse.

In my article Why Buy a Notebook Computer? I wrote about making the decision on whether or not to buy a notebook computer — and when to go for the cheaper models.

But, first, let’s consider some of the limitations of a notebook computer, as compared to a typical desktop computer.

1. Price — for an equally capable computer, a notebook is more expensive

2. Fragility — the notebook is meant to be easily moved from place to place. But, it’s more likely to be dropped and broken than is a desktop computer. The built-in LCD display is one of the most expensive cost items, at least in terms of repair, as well as being the most fragile.

3. Limited user repair — notebooks are much more complicated than are desktops. The first challenge is dis-assembly. The second challenge is reassembly.

4. Much smaller hard drives — the huge notebook drive of today is about 500 GB.

Tips for Choosing Your Next Notebook

BurnWorld.com: The Limitations of Transferring Music & Video from iTunes

2 thoughts on “14 Limitations of the Notebook PC”