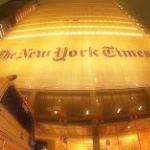 Why Antivirus Software Didn’t Save The New York Times

There is a booming industry that sells computer security products to consumers and businesses. But antivirus companies have a problem: Their software often can’t prevent hackers from breaking into your computer and snooping around.

The New York Times was the latest victim to discover the limitations of antivirus software. The Times revealed Wednesday night that Chinese hackers had gained entry into its computer network for four months in hopes of identifying a reporter’s sources for an investigation into the business dealings of relatives of China’s prime minister.

The Times’ antivirus vendor, Symantec, did little to stop the hackers, the paper said. Of the 45 different kind of malicious software — or malware — the hackers used in their attack, Symantec only detected one of them.

The finding raises questions about the effectiveness of the $7.4 billion antivirus industry. Experts say antivirus software is failing to keep pace with the innovative methods used by sophisticated hackers like those from China.
—Huffington Post | Gerry Smith | 1/31/2013