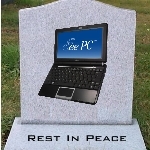 Charles Arthur at guardian.co.uk believes the announcement that Acer and Asus will stop manufacturing netbooks – marks the end of what was once considered ‘the future of computing’.

What killed the netbook?
There are four candidates:
1. The rest of the PC market (including the arrival of ultrabooks)
2. The economy
3. The economics of netbooks
4. The iPad plus the attendant rise of tablets.
—Sayonara, netbooks: Asus (and the rest) won’t make any more in 2013|guardian.co.uk

Our good friend Harry McCracken at Time.com, says not so fast:

The Netbook Isn’t Dead — It’s Just Resting
But just watch. The smallest Ultrabooks are similar in size to the largest netbooks, and at some point their prices will tumble into the sub-$500 territory where most netbooks lived. Once that happens, the netbook will be back — whether or not anyone in the PC business admits it.
http://techland.time.com/2012/12/31/the-netbook-isnt-dead-its-just-resting/

…I think Arthur is a bit too reluctant to tie the whole story together and issue a blistering indictment against the netbook’s assassin. If you study the PC industry over the past five years, you find only one company that had the means, motive, and opportunity. Apple killed the netbook, more or less single-handedly, and we should all be grateful for it.
—Apple Killed the Netbook|slate.com

When you consider the evidence, the culprit is clear: tablets and shifting consumer desires may have left netbooks in a critical state, but it was Windows 8 that killed the netbook off for good. Moore’s law is a cruel mistress indeed.
—Netbooks are officially dead, and Windows 8 pulled the trigger|digitaltrends.com

2 thoughts on “What Killed the Netbook?”