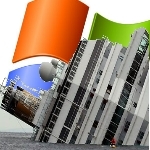 Is it Time for Microsoft to Drop the Windows Name?

By The Pit Crew

Tom Warren at The Verge offers interesting food for thought — Microsoft needs to move away from the Windows brand name.

The Windows brand has served Microsoft well for over 25 years — Windows 1.0 debuted on November 20th, 1985, paving the way for an operating system that has dominated desktop computing ever since. That paradigm for personal computing has changed with the rise of mobile, however. Windows 8 is an ambitious attempt to marry a desktop OS with a new touch-friendly interface designed for tablets and smartphones — but Microsoft would be well served to phase out the battered Windows brand for its mobile efforts.–Tom Warren -The Verge

Interesting response from our friend Harry McCracken at Time Magazine.

Warren is right: The Windows brand carries certain associations, not all of which are positive. Microsoft knows that. The days in which it slapped the name on anything and everything — like all those Windows Live services, most of which had little or nothing to do with Windows — are long over.

But renaming operating systems which are currently called Windows — or their successors or offshoots — won’t lead anyone to think about them differently. It would just reek of a crisis of confidence. One that wouldn’t help — and might hurt — the software’s prospects.–Harry McCracken – Time