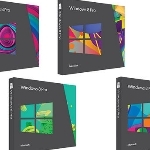 The Four Faces (Versions) of Windows 8

Instead of having one interface(“Windows Store” formerly Metro) for tablets and a separate one (Desktop) for traditional programs, Microsoft has chosen to include both interfaces in Windows 8. Instead of discussing the interface usability I’ll start with the versions of Windows 8 available.

Understanding the varieties of Windows 8 can be a little confusing even for the experts so I’m going to try and explain it as simple as possible.
There are four versions of Windows 8. Which one you choose may be pre-determined for you.

1) Windows 8 RT (once called Windows on ARM)
If you have purchased a new tablet or similar touchy device and you like the new tiled, Windows Store, interface then a Windows RT device may meet your needs. This version isn’t sold by itself. Currently it only comes with a new device. This version won’t run standard Windows applications on its Desktop with the exception of a few provided by Microsoft. All applications must be re-created to run under an “ARM” processor commonly used in tablets and phones. New apps will be available for download and purchase in the Windows 8 Store.

2) Windows 8
For most people currently using Windows, this is the cheapest upgrade path. If you’re buying a new tablet, Ultrabook, laptop or desktop computer this may be the default version of Windows included. This version includes the new tile or “Windows Store” interface but also includes the normal Windows desktop minus a Start button. Most of the applications that run on Windows 7 will continue to work on Windows 8.

1 thought on “The Four Faces (Versions) of Windows 8”