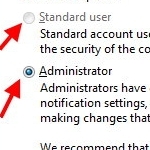 One of the biggest problems with Windows over the years has been security.

For a long time, Microsoft seemed to consider that businesses running enterprise-level servers might need security, but that individual and home users had no need for any such protection.

Fortunately, on day, they woke up to realize that the Internet is a rough place, with people who want to attack and subvert (or even just attack and damage) other people’s computers and data. Bill Gates wrote a letter to Microsoft employees re-focusing them to security being a priority.

As a result, we have seen Windows versions become more and more secure. We even saw Windows Vista with its first incarnation of User Account Control with its extreme overkill.
Windows 7 relaxed some of those controls — or at least gave control of their level of interference to the Administrator users on the computer.

In early versions of Windows, it was basically anyone. When the concept of Administrators and normal users was introduced into Windows, there were simply too many things that users needed to do that required Administrator privileges.

Want to install a program? That took Administrator privileges. Get a new printer? You had to be an administrator to be able to do it.

Why not use an administrator account all the time? The problem is that any malware you might execute accidentally (by opening an attachment, running a program, etc.) would inherit the privileges of the user starting that program. If the administrator did it, the malware had full control over the system.

It sounded great in concept. It worked great with Unix and Linux. But, that approach was a flop with Windows.

The problem was that the user-switching function was extremely easy with Unix and Linux. With Windows, on the other hand, you could either log out as one user and then log in as another (a slow process) or use the “Fast User Switching” (a.k.a., Switch Users) function to change to a different user. Unfortunately, Fast User Switching didn’t always work.

As a result, most users ran as Administrator users. Of course, the computer manufacturers tended to encourage that in order to enhance the user experience (in other words, reduce tech support calls).

So, now we know what Administrator users are (full-privilege users), why they exist, and why limited-users exist. So, how can you check who is an administrator on your computer and change their type, if you want.