Bob originally contacted PC Pitstop for an Extreme MakeOver on Feb. 25th 2010. Due to some scheduling problems on Bob’s part and some shoulder surgery on my part, Bob’s request was lost in the shuffle. But, Bob needed some help and contacted us again on May 27th, his persistence paid off. We rescheduled the MakeOver later that week.

Listening to Bob describe his issues was exactly like listening to 90% of the people I talk to these days. It’s not that their computers don’t work, it’s that they don’t work well. Things take too long to open, Internet connections seem slow and as a rule, hard drive space is starting to disappear. This is especially true with systems that are over 3 years old. The older, smaller, drives of these systems fill up quickly when compared to today’s systems with large capacity hard drives.

Bob’s HP Pavilion shipped with a Celeron 3.33 gig processor and 512 MB of memory. That was satisfactory for the time but is definitely limited for today’s memory intensive applications. It was no surprise to me that Bob’s trusty HP was feeling it’s age.

I didn’t waste any time running the first PC Matic scan. I fully expected, that with this system, we would be a good couple of hours getting things cleaned up. Just the defragmentation alone, I figured would be a couple of hours. Here are the results of the first scan and I a little surprised. 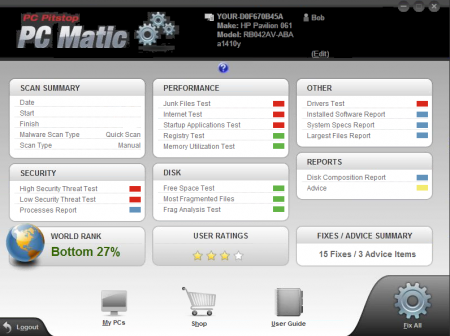 You can see from the scan that this HP Pavilion is ranking in the bottom 27% of PC’s that have been tested. A quick glance at the results shows some High-Level Security Threats in addition to the expected Low Level Threats. This is never a good thing. Virus, trojans, and the like can slow even the fastest systems to a crawl, not to mention infect others. It looks like the problems are most likely from malware rather than fragmentation.

The other immediately obvious things are the Junk Files, Internet Test, StartUp Apps, and even a couple of out dated drivers. I pretty much expect to see these things show up on almost all systems I scan. It’s not necessarily good but it is normal. Junk Files, absolutely, Internet Tweaks, you bet, a couple of new drivers available, almost always. All systems can benefit from these things being corrected on a weekly basis.

I wasn’t surprised to see StartUp Applications listed as the desktop was showing quite a few program Icons. It’s not unusual for systems to become clogged with outdated, never used programs, which start as soon as you hit the power button. Because we can’t build a program that determines which ones are wanted and which ones aren’t, that will be something Bob can clean up on his own. With the limited memory provided with this system, keeping startup items trimmed will be crucial.

Under the REPORTS section I noticed there was a yellow Advice warning tab. I opened it and found the following. 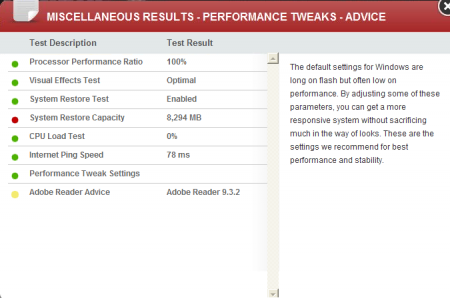 Not so bad. A little wasted space for system restore and the normal suggestion to find a replacement for Adobe Reader. If you want to heed this advice you can easily follow the instructions for making the changes. I covered these and all the red flags with Bob. He decided to leave the drivers “as is” because he was having no problems with the internet or sound drivers currently installed.

We removed the driver updates from the recommended fixes and clicked the FIX ALL button. I settled in for a long wait while the program proceeded. The red Flag for High-Level Security Threats had me worried. I was talking to Bob only a few minutes when the program finished. What, that can’t be? Usually it takes quite a while when a systems shows High Level Threats.

I couldn’t wait to run another test and see the results. Although it wasn’t necessary I closed the program, rebooted, and after reconnecting we ran the second scan. 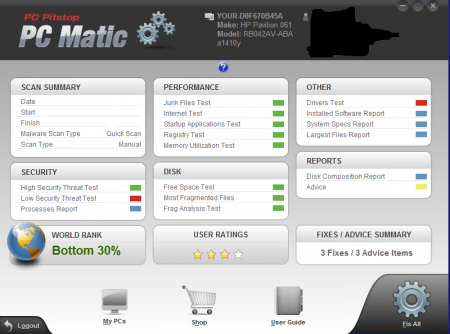 Looking at the WORLD RANK there is an immediate increase in standing. The worrisom HIGH-LEVEL SECURITY THREATS were gone. The Internet Tweaks, Junk Files, StartUp Applications were all improved. Although the Reports sections was still showing the same suggestions Bob was going to fix those later.

It was late on a Friday when we finished and I had to get going, but Bob was happy and mentioned he wanted to use the program on his wife’s desktop. Enjoy Bob, I’m sure PC Matic will fix her up just like it did for you.

Here’s an email I received later from Bob. 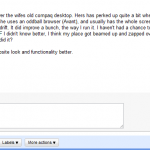 Mine is running pretty good and I did get a chance to work over the wifes old compaq desktop. Hers has perked up quite a bit when I’m running it, but when shes running it not quite as much. I think it has to do with the software and settings she uses. She uses an oddball browser (Avant), and usually has the whole screen filled up with browser windows. She also has her MSNmessenger running all the time, etc. I think you get the drift. It did improve a bunch, the way I run it. I haven’t had a chance to run it on my laptop or hers yet, I’ve been sort of busy trying to get caught up with my outdoor chores inbetween rain days. IF I didn’t know better, I think my place got beamed up and zapped over to the coast. I just doesn’t normally rain her between april and october. Hey, Pitstop din’t have anything to do with that did it?

BTW, I joined the forums and let them know I like the old website look and functionality better.

Thanks Bob. Glad we could help with the computers in your home. I’m sure you’ll enjoy PC Matic and the help that’s available on our forums.